Self-healing is the capability of a material to recover from physical damage. Both physical and chemical approaches have been used to construct self-healing polymers. These include diffusion and flow, shape-memory effects, heterogeneous self-healing systems, covalent-bond reformation and reshuffling, dynamics of supramolecular chemistry or combinations thereof. In this Review, we discuss the similarities and differences between approaches to achieve self-healing in synthetic polymers, where possible placing this discussion in the context of biological systems. In particular, we highlight the role of thermal transitions, network heterogeneities, localized chemical reactions enabling the reconstruction of damage and physical reshuffling. We also discuss energetic and length-scale considerations, as well as scientific and technological challenges and opportunities.

Although significant advances have been achieved in dynamic reversible covalent and non-covalent bonding chemistries for self-healing polymers, an ultimate goal is to create high strength and stiffness commodity materials capable of repair without intervention under ambient conditions. Here we report the development of mechanically robust thermoplastic polyurethane fibers and films capable of autonomous self-healing under ambient conditions. Two mechanisms of self-healing are identified: viscoelastic shape memory (VESM) driven by conformational entropic energy stored during mechanical damage, and surface energy/tension that drives the reduction of newly generated surface areas created upon damage by shallowing and widening wounds until healed. The type of self-healing mechanism is molecular weight dependent. To the best of our knowledge these materials represent the strongest (Sf = 21 mN/tex, or σf ≈ 22 MPa) and stiffest (J = 300 mN/tex, or E ≈ 320 MPa) self-healing polymers able to repair under typical ambient conditions without intervention. Since two autonomous self-healing mechanisms result from viscoelastic behavior not specific to a particular polymer chemistry, they may serve as general approaches to design of other self-repairing commodity polymers.

Previous studies have shown that copolymer compositions can significantly impact self-healing properties. This was accomplished by enhancement of van der Waals (vdW) forces which facilitate self-healing in relatively narrow copolymer compositional range. In this work, we report the acceleration of self-healing in alternating/random hydrophobic acrylic-based copolymers in the presence of confined water molecules. Under these conditions competing vdW interactions do not allow H2O-diester H-bonding, thus forcing nBA side groups to adapt L-shape conformations, generating stronger dipole-dipole interactions resulting in shorter inter-chain distances compared to ‘key-and-lock’ associations without water. The perturbation of vdW forces upon mechanical damage in the presence of the controllable amount of confined water is energetically unfavorable leading to the enhancement of self-healing efficiency of hydrophobic copolymers by a factor of three. The concept may be applicable to other self-healing mechanisms involving reversible covalent bonding, supramolecular chemistry, or polymers with phase-separated morphologies.

Self-healing materials are notable for their ability to recover from physical or chemical damage.We report that commodity copolymers, such as poly(methyl methacrylate)/n-butyl acrylate [p(MMA/nBA)] and their derivatives, can self-heal upon mechanical damage. This behavior occurs in a narrow compositional range for copolymer topologies that are preferentially alternating with a random component (alternating/random) and is attributed to favorable interchain van der Waals forces forming key-and-lock interchain junctions. The use of van der Waals forces instead of supramolecular or covalent rebonding or encapsulated reactants eliminates chemical and physical alterations and enables multiple recovery upon mechanical damage without external intervention. Unlike other self-healing approaches, perturbation of ubiquitous van der Waals forces upon mechanical damage is energetically unfavorable for interdigitated alternating/random copolymer motifs that facilitate self-healing under ambient conditions.

Hierarchical multiphase fibrous morphologies provide strength and elasticity for biological species, facilitating responses to environmental changes. Wound closure of leaves is one example. If polymers can be formed in a similar manner by introducing multiphase-separated morphologies, self-healing in a variety of commodity materials can be achieved. In these studies, we demonstrate the role of phase morphologies, interphases, and viscoelasticity-driven shape memory effects on self-healing. We synthesized phase-separated polycaprolactonepolyurethane fibrous thermoplastic polymers in which microphase separation facilitates the formation of stable interfacial regions between hard and soft segments. Self-healing can be repeated many times. This behavior is attributed to the shape memory effect, given that micron-scale interphase reduces chain slippage, enabling entropic energy storage during damage. Chemically identical but nanophase-separated copolymers do not exhibit this behavior. These studies show that self-healing can be achieved by morphology control and facilitated by thermal or other volume-induced transitions.

Sugar moieties were incorporated into crosslinked polyurethane (PUR) networks in an effort to achieve self-repairing in the presence of atmospheric carbon dioxide (CO2) and water (H2O). When methyl-α-D-glucopyranoside (MGP) molecules are reacted with hexamethylene diisocyanate trimer (HDI) and polyethylene glycol (PEG) to form crosslinked MGP-polyurethane (PUR) networks, these materials are capable of self-repairing in air. This process requires atmospheric amounts of CO2 and H2O, thus resembling plant’s behavior of carbon fixation during photosynthesis cycle. Molecular processes responsible for this unique self-repair process involve physical diffusion of cleaved network segments as well as the formation of carbonate and urethane linkages. Unlike plants, MGP-PUR networks require no photo-initiated reactions, thus are capable of repairs in darkness under atmospheric conditions.

This study focuses on the development of facile polyethylenimine-copper (C2H5N-Cu) supramolecular polymer networks which upon mechanical damage are capable of reversible UV-induced self-repairs by the reformation of Cu-N coordination bonds. The chemical changes responsible for self-healing that leads to network remodeling include the formation of C2H5N-Cu complexes which, upon UV absorption, induce charge transfer between σ(N) bonding and dx2-y2(Cu) antibonding orbitals. The primary structural component responsible for network remodeling is the C2H5N-Cu coordination complex center that, upon UV exposure, undergoes square-planar-to-tetrahedral (D4h→ Td) transition. The energy difference between dx2-y2 and dxz/yz orbitals during process change decreases significantly, enabling the σ(N) → dx2-y2(Cu) charge transfer and leading to energetically favorable Cu-N geometries. Manifested by virtually no temperature changes during UV-initiated self-healing, a unique feature of this network is the high efficiency of the damage-repair cycle resulting from the reversible conversion of electromagnetic radiation to chemical energy.

Polyurethanes have many properties that qualify them as high-performance polymeric materials, but they still suffer from mechanical damage. We report the development of polyurethane networks that exhibit self-repairing characteristics upon exposure to ultraviolet light. The network consists of an oxetane-substituted chitosan precursor incorporated into a two-component polyurethane. Upon mechanical damage of the network, four-member oxetane rings open to create two reactive ends. When exposed to ultraviolet light, chitosan chain scission occurs, which forms crosslinks with the reactive oxetane ends, thus repairing the network. These materials are capable of repairing themselves in less than an hour and can be used in many coatings applications, ranging from transportation to packaging or fashion and biomedical industries.

Polyurethanes have many properties that qualify them as high-performance polymeric materials, but they still suffer from mechanical damage. We report the development of polyurethane networks that exhibit self-repairing characteristics upon exposure to ultraviolet light. The network consists of an oxetane-substituted chitosan precursor incorporated into a two-component polyurethane. Upon mechanical damage of the network, four-member oxetane rings open to create two reactive ends. When exposed to ultraviolet light, chitosan chain scission occurs, which forms crosslinks with the reactive oxetane ends, thus repairing the network. These materials are capable of repairing themselves in less than an hour and can be used in many coatings applications, ranging from transportation to packaging or fashion and biomedical industries.

These studies report the development of poly(methyl methacrylate/n-butylacrylate/2-[(1,3,3-trimethyl-1,3-dihydrospiro[indole-2,3′-naphtho[2,1-b][1,4]oxazin]-5-yl) amino]ethyl-2-methylacrylate) [p(MMA/nBA/SNO)] copolymer films that upon mechanical scratch undergo color changes from clear to red in the damaged area, but upon exposure to sunlight, temperature and/or acidic vapors, the damaged area is self-repaired and the initial colorless appearance is recovered. The process is reversible and driven by the ring-opening-closure of spironapthoxazine (SNO) segments to form merocyanine (MC), which are recovered back to the SNO form. Upon mechanical damage, SNO segments of the neighboring copolymer segments form inter-molecular H-bonding that stabilizes copolymer backbone, that remains in an extended conformation. External stimuli, such as light, temperature, or acidic environments cause a dissociation of the H-bonded MC pairs, which are converted back to SNO. This process is associated with the p(MMA/nBA/SNO) backbone collapse, thus pulling entangled neighboring copolymers to fill removed mass and repair a scratch.

Repair of physically separated thermoplastic polymers containing γ-Fe2O3 nanoparticles without sacrificing their mechanical properties is achieved by applying an oscillating magnetic field. As γ-Fe2O3 nanoparticles oscillate at the frequency of the magnetic field, localized amorphous flow occurs, and a permanent repair of physically separated polymeric films is achieved. 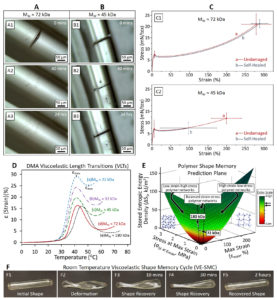 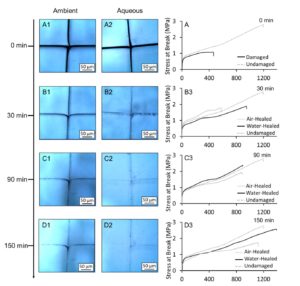 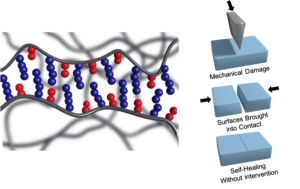 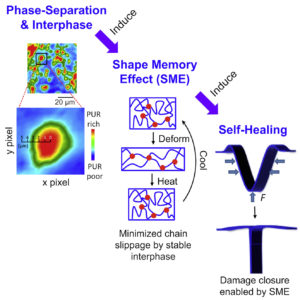 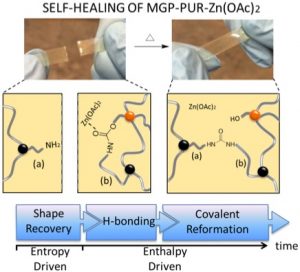 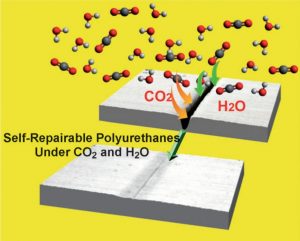 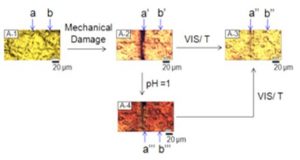